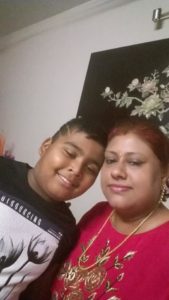 When my son Umang was 18 months old he joined Neha, and now he is in 3rd standard, it’s been 8 and a half year he is with Neha. She has been a very important part of Umang’s life as she has seen him grow in front of her.There is no one thing that I can say has developed in him, rather he is been moulded a better child wholly with Neha.  I would not hesitate to say that she is his mother too.

Neha is Umang’s Yashodha maiya and Umang is her ladessar.

We are a proud part of LNG Family